The sixth edition of the highly acclaimed “Fundamentals of Computers” lucidly presents how a computer system functions. Both hardware and software aspects of computers are covered. The book begins with how numeric and character data are represented in a computer, how various input and output units function, how different types of memory units are organized, and how data is processed by the processor. The interconnection and communication between the I/O units, the memory, and the processor is explained clearly and concisely. Software concepts such as programming languages, operating systems, and communication protocols are discussed. With growing use of wireless to access computer networks, cellular wireless communication systems, WiFi (Wireless high fidelity), and WiMAX have become important. Thus it has now become part of “fundamental knowledge” of computers and has been included. Besides this, use of computers in multimedia processing has become commonplace and hence is discussed. With the increase in speed of networks and consequently the Internet, new computing environments such as peer to peer, grid, and cloud computing have emerged and will change the future of computing. Hence a new chapter on this topic has been included in this edition.

Key features
•  Fully updated retaining the style and all contents of the fifth edition.
•  In-depth discussion of both wired and wireless computer networks.
•  Extensive discussion of analog and digital communications.
•  Advanced topics such as multiprogramming, virtual memory, DMA, RISC, DSP, RFID, Smart Cards, WiGig, GSM, CDMA, novel I/O devices, and multimedia compression (MP3, MPEG) are described from first principles.
•  A new chapter on Emerging Computing Environments, namely, peer to peer, grid, and cloud computing, has been added for the first time in an entry level book.
•  Each chapter begins with learning goals and ends with a summary to aid self-study.
•  Includes an updated glossary of over 340 technical terms used in the book. 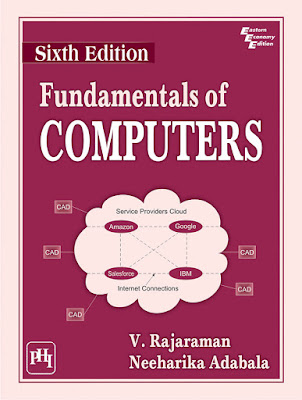 About the Authors
Prof. V. Rajaraman, Honorary Professor, Supercomputer Education & Research Centre, IISc. Bangalore, is the author of more than 14 books on our list.

A pioneer in Computer Science, education and research in India, Prof. Rajaraman has received numerous awards for his contribution to the field including the Padma Bhushan by the President of India in 1998. He has also been awarded the Shanti Swarup Bhatnagar Prize in 1976. He is the recipient of Homi Bhabha Prize by UGC, Om Prakash Bhasin Award, ISTE Award for excellence in teaching computer engineering, Rustom Choksi Award, Zaheer Medal by the Indian National Science Academy, and Lifetime Contribution Award by the Indian National Academy of Engineering in 2005. He was awarded D.Sc. (h.c.) by IIT Kanpur and Bengal Engineering and Science University, Shibpur.

Learn more about him and his books, click on the following links
http://www.serc.iisc.ernet.in/~rajaram/
https://en.wikipedia.org/wiki/Vaidyeswaran_Rajaraman
https://www.phindia.com/SearchBooks/SearchphiBooks/?searchbooks=rajaraman

Neeharika Adabala, Ph.D. (IISc), is the founder and chief architect of CybULab Pvt. Ltd., a company that applies information visualization techniques and cognition theory to develop educational services. She is also a co-founder of Lifetape Inc. She was previously a researcher at Microsoft Research India, where she worked on effective visualization of and interaction with information, as well as on use of semantics to improve user-computer interaction. She has worked in MIRALab at the University of Geneva and also in University of Central Florida. She has published papers in the areas of fluid simulation, realistic and abstract rendering techniques, and information visualization. She is on the editorial board of the Springer-Verlag journal for computer graphics and serves on the program committees of international conferences in the areas of computer graphics and animation.

Use Promo code PHI#6663 to get 30% Off. Click https://www.phindia.com/Books/BookDetail/OTc4ODEyMDM1MDY3MA