We Wish All Merry Christmas
And
A Very Happy New Year! 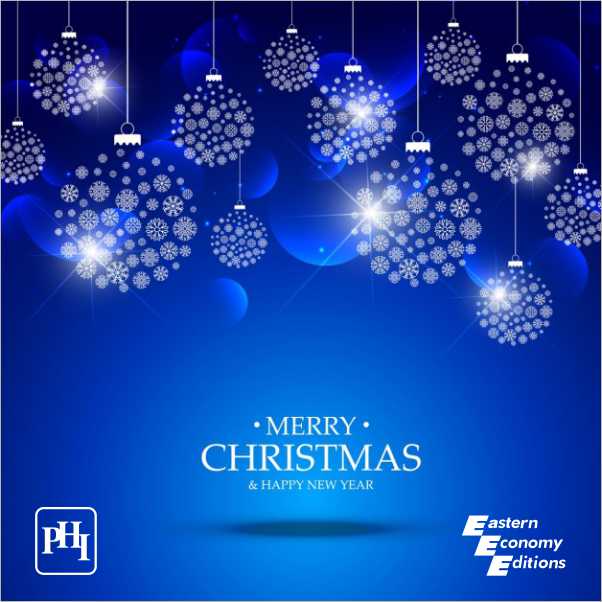 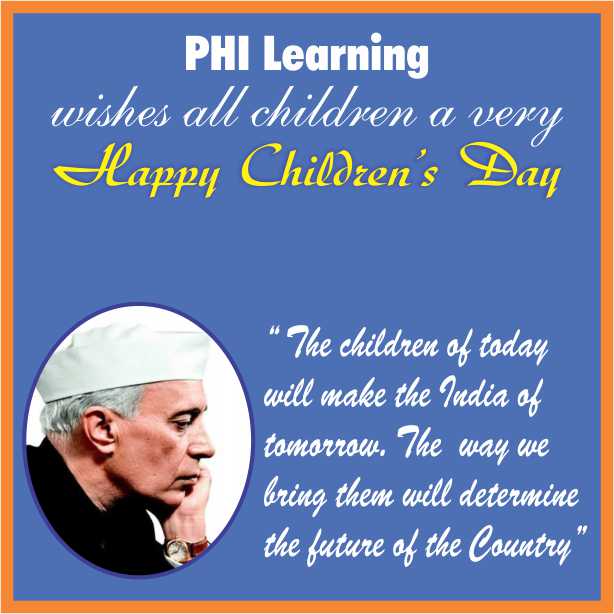 https://www.ndtv.com/india-news/childrens-day-2017-10-stirring-quotes-from-pandit-jawahar-lal-nehrus-tryst-with-destiny-speech-1774944
Email ThisBlogThis!Share to TwitterShare to FacebookShare to Pinterest

PHI Learning Wishes Everybody a Very Happy Diwali!
May this festival signifying victory of good over evil inspire us to stand for good and truth in our lives! 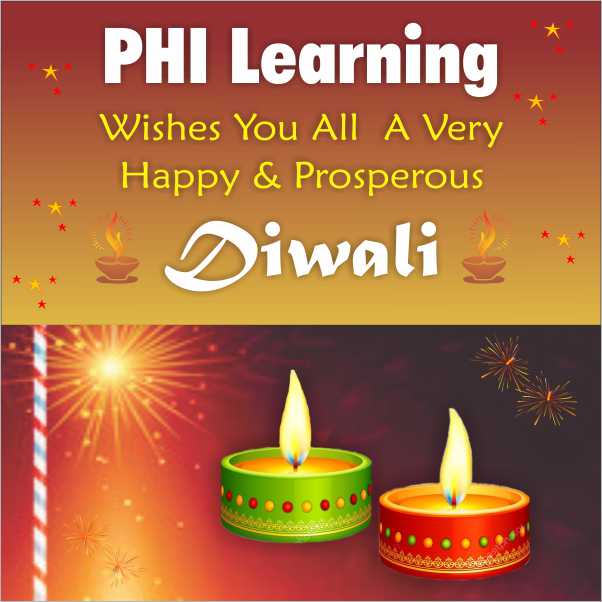 Career advice:
How to Prepare Students for University Teaching

1) Take it easy in the first couple of weeks 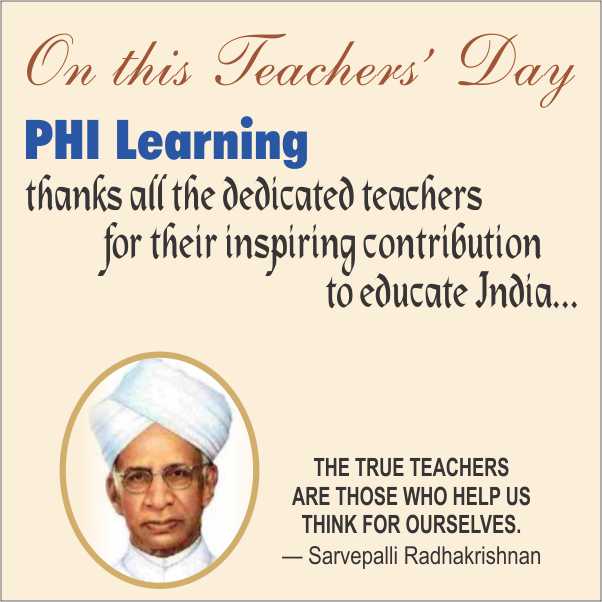 Lets celebrate Teachers' Day today and remember all those teachers who contributed towards our growth as an individual and a human being. We are sure everybody must be having at least one such teacher to remember. We will always endeavour to help teachers to teach and continue doing so. 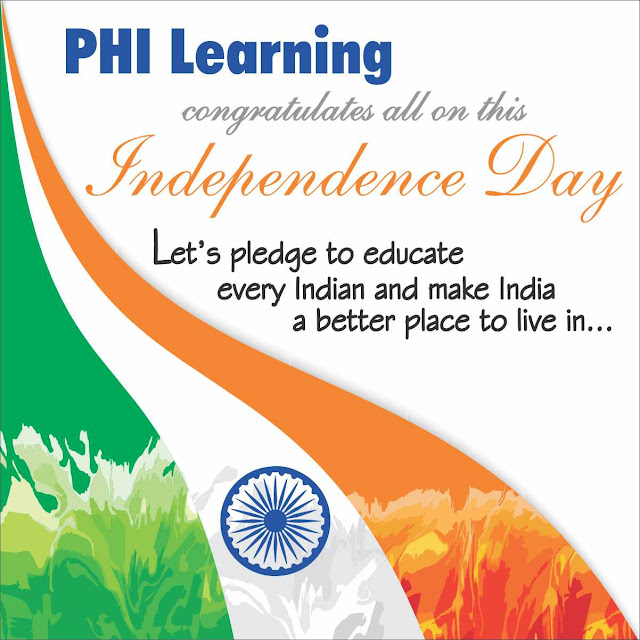 Daniel Spielman, Department of Computer Science, Yale University“Introduction to Algorithms, the ‘bible’ of the field, is a comprehensive textbook covering the full spectrum of modern algorithms: from the fastest algorithms and data structures to polynomial-time algorithms for seemingly intractable problems, from classical algorithms in graph theory to special algorithms for string matching, computational geometry, and number theory. The revised third edition notably adds a chapter on van Emde Boas trees, one of the most useful data structures, and on multithreaded algorithms, a topic of increasing importance.” 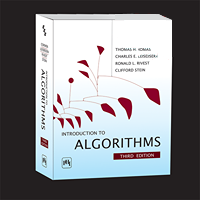 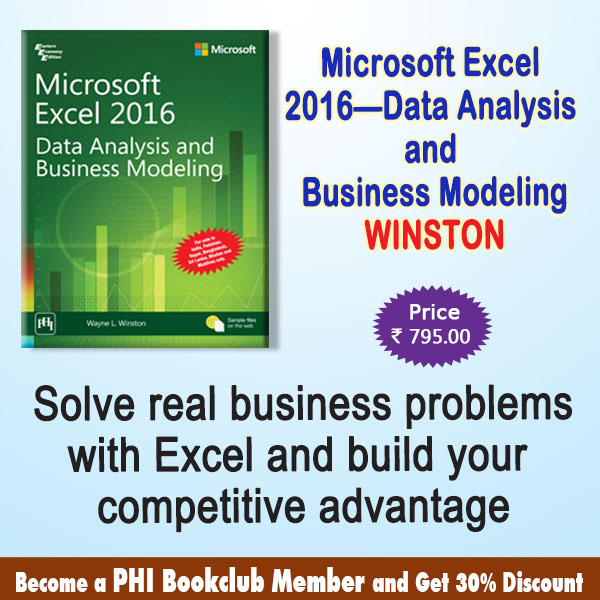 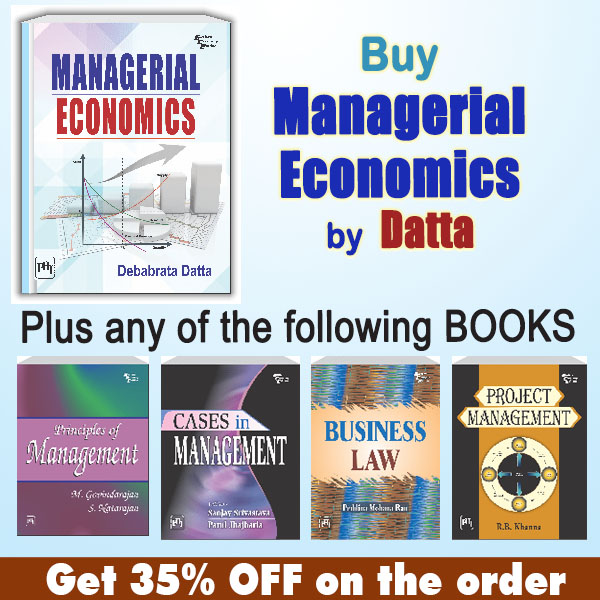 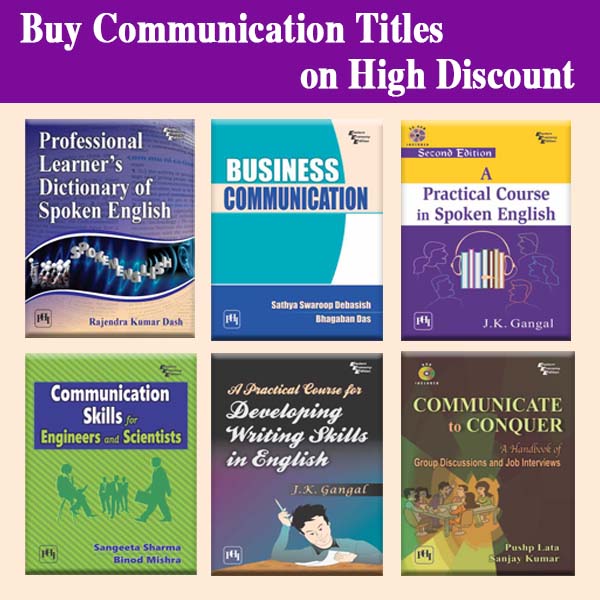 The Microsoft Step by Step Series

For beginning to intermediate skills level users, Step by Step is the most effective way for readers to master a core set of skills quickly, using the step-by-step lessons

•Learn Core features and tasks - one step at a time
•Readers can take just the lessons they need and build exactly the skills they want
•Readers can quickly find topics of interest with topic checklists, details table of contents, and indexes, Expert tips, and sidebars from the author clarify important points
•Coverage of Microsoft Office Specialist (MOS) objectives enables preparation for MOS certification
•Erratta and Support
•Downloadable Practice Files 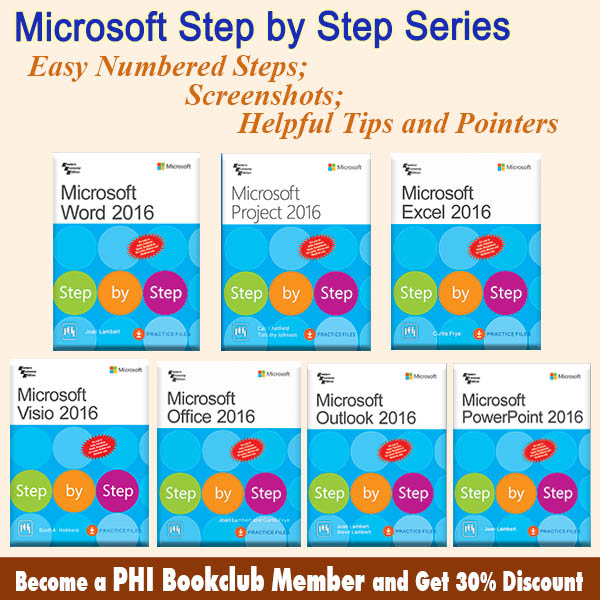 Eid Mubarak To All!

May God Bless You In All Your Endeavours! 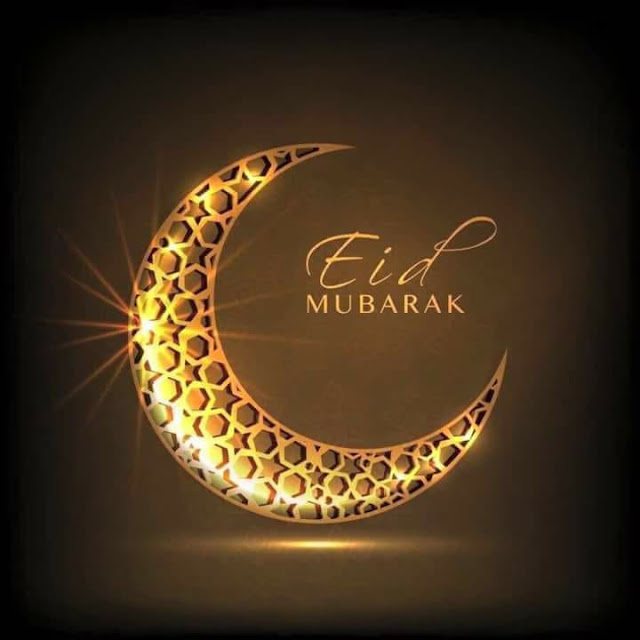 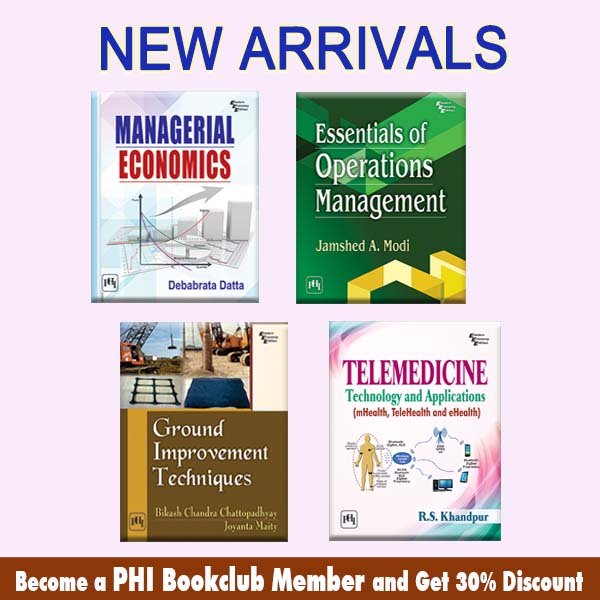 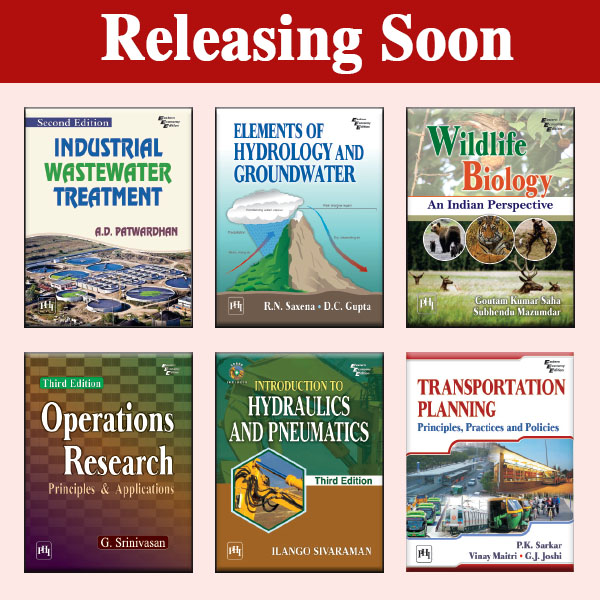 Get 30% Discount on every purchase through our website https://www.phindia.com/PHIBookclub 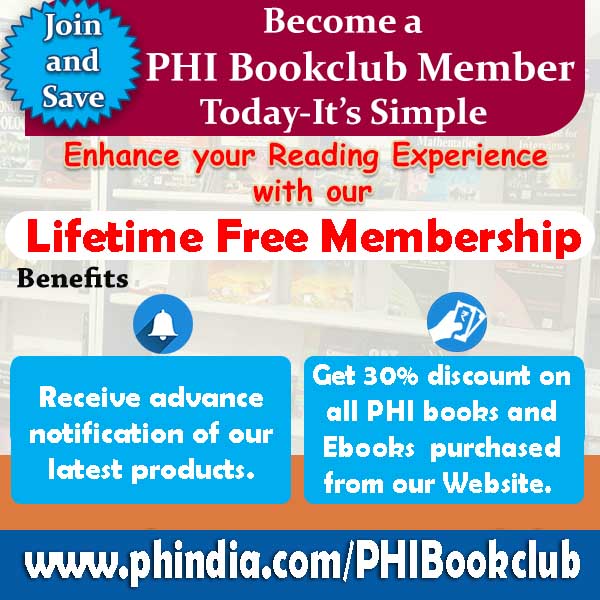 "This book is literally the Bible of algorithms. Anyone wishing to call themselves a computer programmer needs to have at least a basic amount of knowledge about the creation, evaluation and implementation of algorithms, and this book more than provides that. It is used in universities all around the world. Although most of its matter may be outside the syllabus of Indian colleges, it is extremely useful while dealing with hard Computer Science subjects like Analysis & Design of Algorithms, Data Structures & Algorithms, Computer Graphics, Robotics & Artificial Intelligence, System Programming & Compiler Construction etc." 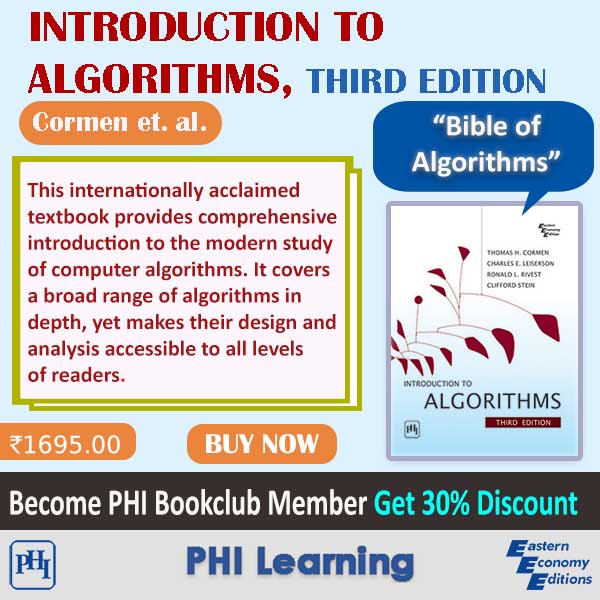 The Microsoft Step by Step Series

For beginning to intermediate users, Step by Step is the most effective way for readers to master a core set of skills quickly, using the step-by-step lessons

•Learn Core features and tasks - one step at a time
•Readers can take just the lessons they need and build exactly the skills they want
•Readers can quickly find topics of interest with topic checklists, details table of contents, and indexes, Expert tips, and sidebars from the author clarify important points
•Erratta and Support
•Downloadable Practice Files 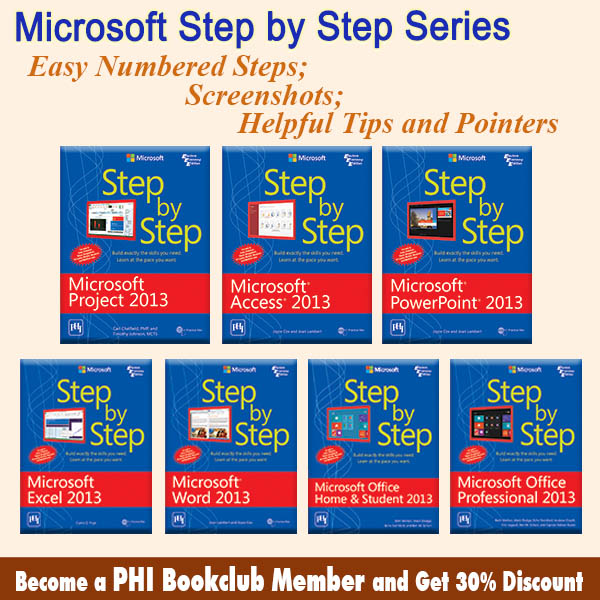 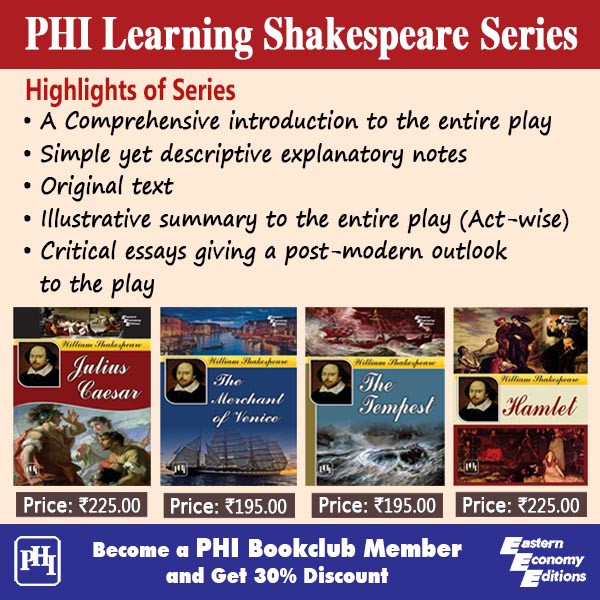 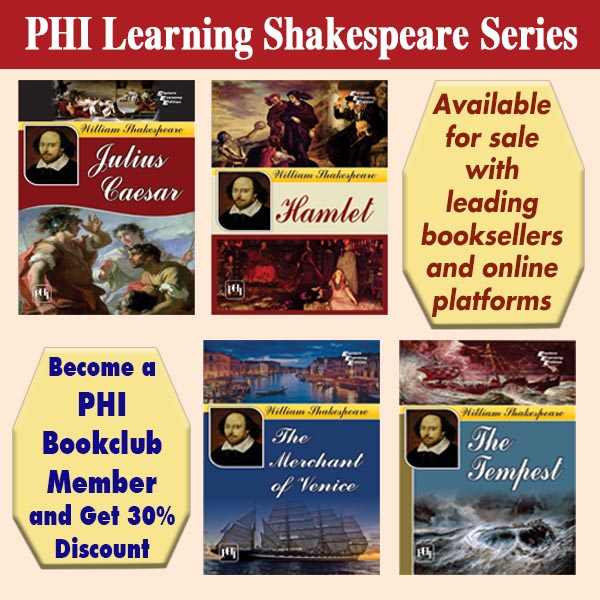 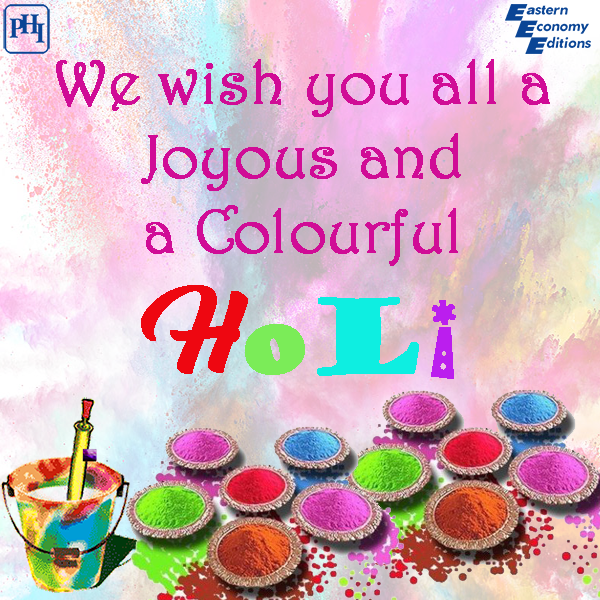 Don't let anyone tell you you're weak because you're a woman 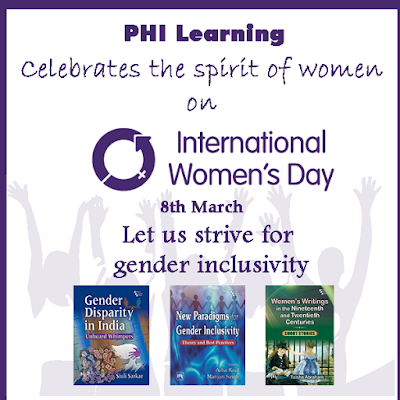 Though India achieved its independence on August 15, 1947, it was only on January 26, 1950 that the Constitution of India was finally adopted, making the country a sovereign, secular, and democratic republic.

The transition of India from a British colony to a sovereign, secular, and democratic nation was indeed historical. It was a long journey of around two decades that started with the conceptualisation of the dream in 1930 to its actual realisation in 1950.

Lahore Session of the Indian National Congress
The seeds of a republican nation were sowed at the Lahore session of the Indian National Congress at the midnight of 31st December, 1929. The session was held under the presidency of Pt. Jawaharlal Nehru. Those present in the meeting took a pledge to mark January 26 as "Independence Day" in order to march towards realising the dream of complete independence from the British. The Lahore Session paved way to the Civil Disobedience movement. It was decided that January 26, 1930 would be observed as the Purna Swaraj (complete Independence) Day. Many Indian political parties and Indian revolutionaries from all over the country united to observe the day with honour and pride.

Indian Constituent Assembly Meetings
The Indian Constituent Assembly, which was constituted as a result of the negotiations between the Indian leaders and members of the British Cabinet Mission, had its first meeting on December 9, 1946. The objective of the Assembly was to give India a constitution, which would serve a lasting purpose and hence appointed a number of committees to thoroughly research the various aspects of the proposed constitution. The recommendations were discussed, debated and revised many times before the Indian Constitution was finalised and officially adopted three years later on November 26, 1949.

Constitution Came into Force
Though India became a free nation on August 15, 1947, it enjoyed the true spirit of Independence on January 26, 1950 when the Constitution of India finally came into force. The Constitution gave the citizens of India the power to govern themselves by choosing their own government. Dr. Rajendra Prasad, took oath as the first President of India at the Durbar Hall in the Government House and this was followed by the Presidential drive along a five-mile route to the Irwin Stadium, where he unfurled the National Flag.

Ever since the historic day, January 26 is celebrated with festivities and patriotic fervor all around the country. The day owes its importance to the constitution of India that was adopted on this day. 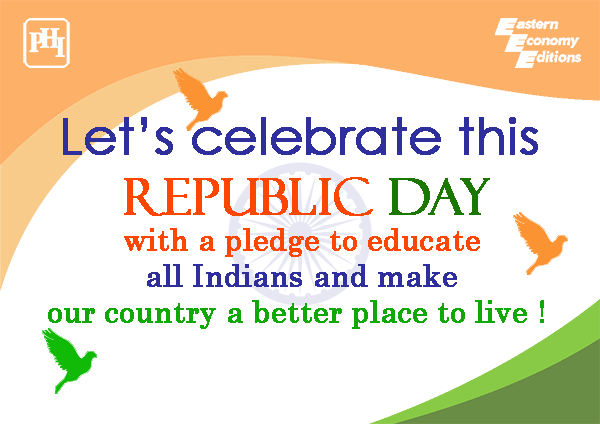 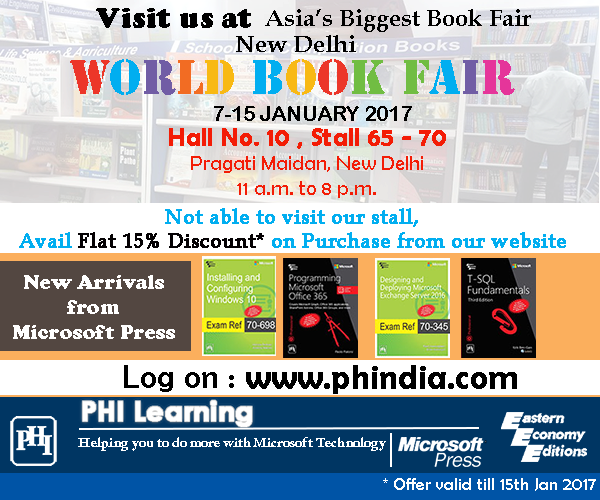 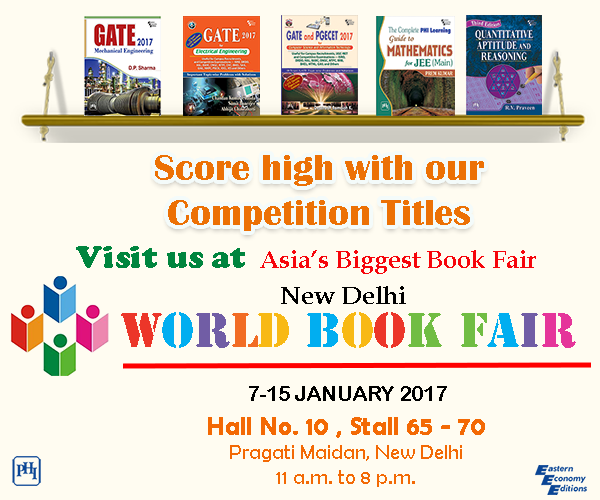 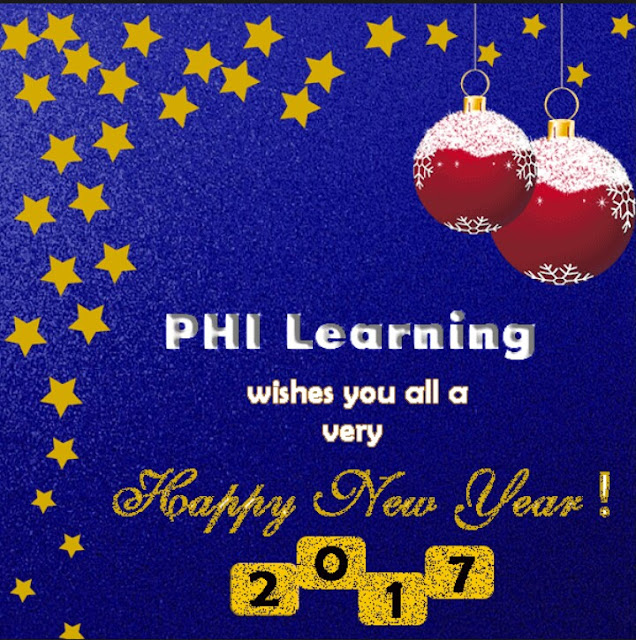